Like Batman, you don’t need super powers to do a great job,  and that goes for UX work too. But you do need four things:

Like Lego, small bricks/insights/changes add up to big results and great experiences!

And that was where my talk last year at UXLibs II ended.  I want to continue from there and talk about the impact that UX has had at the Brynmor Jones Library since that time.  Firstly, was all that work,  effort, stress, worry and resource really worth it?  The answer to that question is yes, a big fat yellow YES! Stamp right there on the screen.  Yes, it was certainly worth it.  I want to run through a few changes which were a direct result of UX research through 2016.

Last year I stood here and said that our café didn’t really work,  that the queues were too long and that people would rather go across campus at busy times to grab a coffee, then bring it back to the library. Not a great experience really.  So as a result, we worked with our facilities directorate to install a coffee cart on our ground floor to cater for the ‘grab and go’ market.  This has been really well received by students and also library staff who can now quickly grab a good cup of coffee and be back in their office space within a few minutes.

Last year I stood here and said that we found our directional signage to be inadequate, in fact we didn’t really have any!  As a prototype we installed pop-up directional banners, which were very successful and well received.  Following this, we undertook a complete signage review and installed new permanent signs in late 2016.  These have had a very positive impact with regard to people navigating the library building.

I said we found that people wanted to eat and drink through the full building,  in fact I 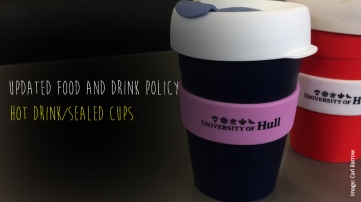 think we really just validated what we already knew, but validation is important.   I also highlighted that one of the main reasons for this is that we are open 24/7 and people spend long periods of time in the building and need food and drink during those periods.  As a result we updated our food and drinks policy and whilst we still don’t allow food, we do now allow hot drinks in sealed cups.  This has been very much appreciated.

We have made other changes such as installing new printers, adding phone charging stations and refocusing digital signage, I am more than happy to speak to anyone about all of our UX related changes over the next two days and beyond.

I want to talk about the bigger or wider impact of UX work at Hull and for me and our senior management team I think this has been the realisation that UX should be included as an element in everything we do, that UX isn’t just about the students put perhaps about library staff too.  Seeing some very positive service changes as a direct result of UX research, certainly proved its value.

Let me tell you a story, I started hearing people say things like “ I need and ipad!”  or “Mike has an ipad so I should have one too”,  and these things were getting bought,  it wasn’t just ipads it was other devices too.   There were times when I just wanted to hold my head in my hands and scream inside! Because I really wasn’t sure that these devices were the right ones for the jobs they were supposed to do.  This was actually validated on a number of occasions.

But this isn’t just about technology, it’s about space too.  I started hearing comments like “This office it too noisy”,  “I have nowhere to make a private phone call”,  “need a more creative space!”.   The Brynmor Jones Library was redeveloped, with completion being three years ago.  Staff space however, was planned in 2011.  Since then, the building was actually developed, we went through a significant organisational change program which resulted in new teams and new business processes.  So no wonder people are saying these thing.  We are working in an environment that doesn’t support our needs!

So thinking about these two areas and the success we had with UX already, I suggested to our Senior Managers that we run a UX project to take a holistic view of space and technology for library staff.  I said I would produce a space profile and a technology profile for every role,  and then link that with a comprehensive technology audit so we really understood what equipment we had at our disposal.  Our SMT liked the idea and give me three months to do it!

I established a project team of four people and used the following UX techniques to gather data from 20 members of staff covering all roles and where appropriate,  two staff from each role.

Questionnaire!  Yes, I know.  I always say that I’m very proud of the fact that I haven’t used questionnaires as a data gathering tool at the Brynmor Jones library for over two years.  I stand by that comment.  I used a questionnaire in this instance for two reasons.  Firstly,  Library staff love questionnaires! They make them feel comfortable, they are tangible and they understand them.  I used it as an anchor point and a way of getting them on board with the project.  I also use it as a tool to get people thinking about the way they work currently and how they might want to work before moving onto some of the other techniques.  I will be completely honest in saying that we probably only used 5-10% of the survey data,  and much of that was annotations that staff has added.  So, questionnaires are still bad, but in this case worked for us.

I’m not going to go through the techniques, many of you already understand them, some you will learn about this week and if you want any further information please just grab me for a chat.

The project of course, was not without its obstacles.  Many of these were around people

and perceptions.  There was a perception from some that this was just about my team,  that we wanted new kit,  that we wanted an iPad! Of course, completely untrue.  There were also people who just didn’t want to be involved, they felt uncomfortable with the techniques, they didn’t want to do a cognitive map, they didn’t work that way.  They didn’t see the value.  One of our library assistants who was on the project team,  spent a lot of time just talking to people and explaining to them that this really wasn’t about my team and that it was about everyone and ensuring that we are able to provide everyone with the space and technology they need in the future.  She did a great job and managed to bring a number of people on board that otherwise would not have engaged in the project.

There were also obstacles for the project team. The first was to ensure that we really weren’t just ‘in it for ourselves’.  Of course our data needed to be included in the research, that was critical but we had to ensure it held no more weight than any other data and we needed to take ourselves to a place where we were could take an overview.  This was more difficult for some of the team than others.

Data overload was a big issue for me personally,  we gathered a lot of data! I felt like I was drowning in data.  The fear of failure that I spoke about last year certainly came back.  What if this didn’t work? But I thought back to what I said at the beginning of this talk,  Have faith and don’t be scared,  Trust in the process, the techniques and let the data tell the stories.

So,  what did we find out?  We’ll look at spaces first.

From the research we undertook we identified a requirements for eight working environments.  This surprised me as I was thinking maybe four:

We also looked at why someone might choose the space in which they would want to work:

So onto technology results,  what did we find out about technology.  I will admit that I found technology very difficult. If felt very personal, especially since we were trying not to take into account personal preferences and looking purely at the role, not at the individual (at this point).

We identified seven technology profiles which you can see on the screen.  Every role was assigned to one of these profiles. This assignment is based on the equipment that someone new coming into a role would need,  not based on what staff have now.  We aren’t about to start taking equipment off anyone and we aren’t guaranteeing that new equipment will be bought.  This is about where we might want to be in the future.

The technology audit that we undertook included personal devices that staff are using at work.  It certainly surprised me just how widespread this is and how role or seniority play little or no part in it.  We have a significant amount of staff bringing and using their own smart phones, tablets and laptops.  This is fine, and could be seen as being very positive.  However, We need to be mindful that equipment such as high spec smart phones and tablet PCs can change the job experience of staff members and in some cases increase productivity and job satisfaction.

This was particularly evident in Library Assistant roles where we saw that working practices were significantly different from one staff member to another, depending on the personal equipment they used.  Out of four library assistants included in the study, it was clear that access to a smart phone, increased productivity for two members of staff.  We should consider the impact of this on staff who are unable to provide their own devices and ensure they are not disadvantaged.  We also need to ensure that we provide appropriate digital literacy training so that staff can see the benefits of using mobile equipment as part of their role should they wish to do so.

Culture!  I want to highlight that any development of working spaces is intrinsically linked to culture.  We can provide the best staff spaces but if we don’t have a culture that enables and encourages all staff to work differently and use these spaces, they will fail.  This is something that we will be working on over the coming months. Certainly don’t underestimate culture.

And lastly I want to finish off with a statement “This is UX not CX!”.  UX is not just about our customers, library staff,  you guys here are all library users and use the library as much if not more that everyone else coming into the building.  If we can apply the same techniques to understand our behaviours and working styles that we use with students and collect and analyse that data alongside all the other data,  we are in a very powerful position to develop really great user centred services.

One thought on “UXLibs III – UX Your Desk!”